Suzuka Circuit is one of the most renowned circuits in Japan as it has often hosted Formula 1 events and other international race series. It was originally designed as a Honda test track which opened in 1962. The circuit has been modified several times throughout the years, the most significant being the addition of a chicane just before the main straight. Besides the main Suzuka Circuit, there is also a South Course which is a smaller circuit. 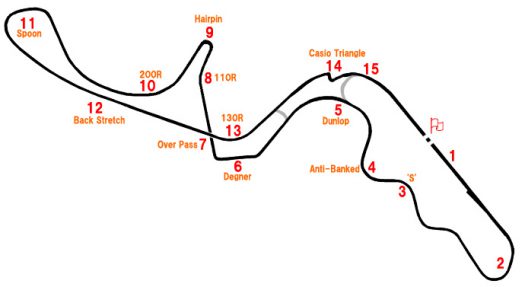 Suzuka Circuit has 5 different versions. The full circuit length for cars measures 5807 meter, for bikes it is 5821 meter. The circuit can also be splitted as can be seen in the figure above, then it is possible to make the East Course and West Course, and the West Course for bikes.

A circuit cruise over the full length of the circuit is possible occassionally. It is basically 2 laps behind a pace car which drives a maximum of 75 km/h. The price is 3100 Yen. Free driving on the circuit is also possible but for this it is needed to join special organised events. It can be found on the following link in the website: 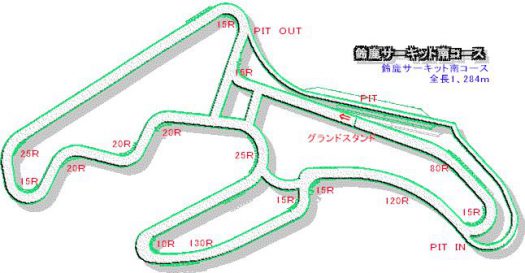 The South Course has a length of 1284 meter in its full form but shorter versions are also possible. It is often used by carts and bikes but from time to time there are also events for cars such as grip driving and gymkhana. Details can be found on the following site:

Suzuka has many more to offer besides the circuit. There is an attraction park, resort facility, driving education center, restaurants, a memorial hall and an attraction called the Circuit Challenger. With the last you can drive the East Course with an electric cart.

Suzuka Circuit is located in Mie prefecture approximately 1 hour driving by car from Nagoya. In case of special events, there is usually special public transportation available. From Nagoya Station, a train can be taken to Shiroko Station from where the bus 03 goes to the circuit.