In 1937 Toyota Motor Corporation was founded. The headquarters are located in the city Toyota, named after the company. The cars sold in Japan from 1947 until mid 60’s used the Toyopet name. It was until this time that the majority of production was meant for Japan and export figures were low.

One of the first iconic cars of Toyota is the Sports 800 which started production in 1965. At that end of that very same year it was the 2000GT that shocked the public on the Tokyo Motor Show. It showed that Japan was also able to create an attractive sportscar. It went in production in 1967 and in this year Toyota also released the 1600GT. The 1600GT was based on the Corona 2-door coupe but it’s engine shared the same technology with the 2000GT. 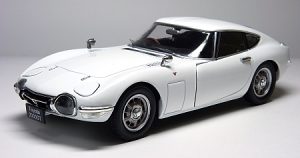 In the 80’s Toyota rapidly started to expand overseas. Although many models were exported, there were still a lot of unique models to Japan at this time such as Chaser and Soarer Aerotop. And even for the exported models, not all versions or grades were exported.

The 90’s were the peak of Japanese industry and Toyota offered a complete line-up of sports cars including the Celica, MR2, Soarer and  Supra. And even very unique models like to Toyota Sera. Even sedans like the Chaser, Mark II and Aristo were packed with the state-of-the-art performance.

For it’s 75 year anniversary Toyota created a complete Toyota model tree for the models until 2010.