Mazda started to produce its first cars in the early 60’s with the R360 being released in 1960 followed by the P360 Carol in 1962 which dominated the kei car sales in Japan at that time.  Mazda engineer’s were inspired by the rotary engine. Mazda soon formed a partnership with NSU and put a lot of effort in research and development in the rotary engine which resulted in the Cosmo Sports sports car introduced in 1967. 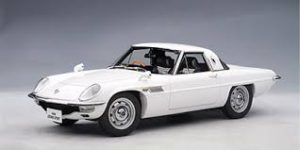 As such, Mazda had a significant variety of cars on offer of which many were never officially exported from the Japanese market.