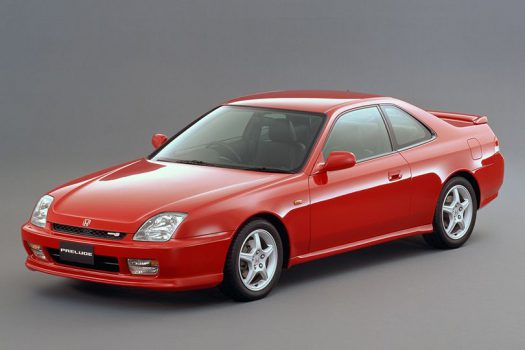 The Honda Prelude is sold worldwide since 1978 as the affordable sporty front-wheel drive coupe. Until the arrival of the NSX it was the flagship of Honda. The fifth generation appeared on the 7th of November 1996. Most markets received similar specification vehicles albeit under a different name. The Japanese market received a unique version called the Type S.

The Type S has the H22A engine which is a 2.2 liter big and producing around 220 horsepower. The same engine is also found in a different grade called the SiR S Spec. To cope with the stronger engine, the front suspension was revised. The Type S also featured Honda’s new ATTS (Active Torque Transfer System), which is an more advanced differential between the front wheels which can send torque to the outer wheel to enhance turning. The Sir S Spec featured a regular viscous limited slip differential.

Another interesting technology that helped cornering was the four wheel steering. In the previous generation Prelude, the rear wheels could steer up to 6 degrees, but in the 5th generation, 8 degrees was possible. The Type S also featured an Active Control ABS system which was tuned more for sporty driving.

The exterior featured 5 spoke alloy wheels and Type S badging. An option for the Type S but all other Prelude grades as well was a moon roof. In total around 5500 units have been sold of the Type S, SiR and SiR S Spec.

Click on the picture below to see the Honda Prelude details and specifications per year such as weight, new price and equipment for each version in the Goo-net.com catalog.