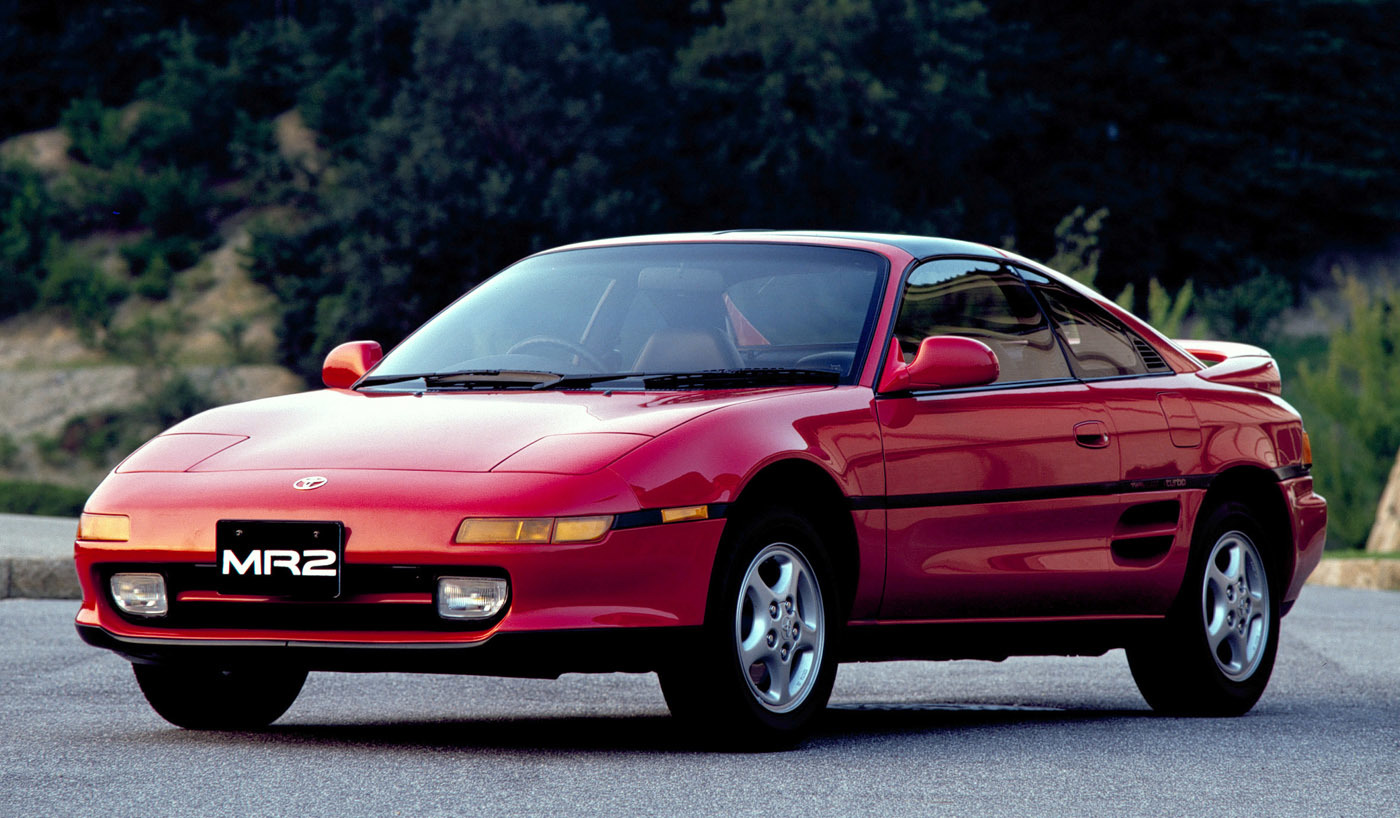 The second generation MR2 was introduced in 1989 and compared to the first generation it grew significantly but on the other side, the engines were also stronger. The first generation (AW11) being a light sportscar, the new SW20 was more marketed as a sporty mid-engined GT car. The 2-seater configuration was unchanged but the cabin was more spacious. From its introduction, two body styles (coupe and targa) and 2 engines (normally aspirated and turbo) were available.

A special Midship Express Japan Tour truck was used to exhibit the new MR2 to the public all throughout Japan. At the time of its introduction three grades were available, the G, G-Limited and GT. The G and G-Limited were available with the 165 horsepower 1998cc 3S-GE engine in both manual and automatic transmission. And a 225 horsepower turbocharged version (3S-GTE) was offered as well but the only available grade was GT.  The customer then had the choice to choose for the standard coupe model or T-bar model, featuring removable glass roof panels that can be put behind the rear seats. 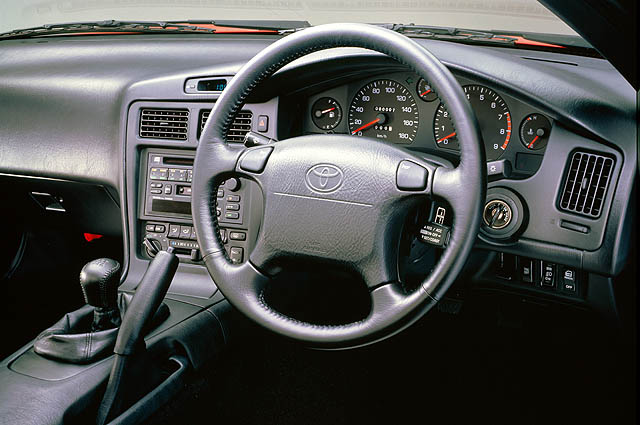 Over its 10-year lifespan, the SW20 can be categorised in 5 revisions. The first revision was from its introduction until December 1991. The  second revision saw changed on the exterior with a deeper front lip and new 15″ wheels. In the interior there was a new steering wheel or the customer could choose for a package with Recaro seats and a Momo steering wheel (on the G-Limited and higher grade). The suspension was re-tuned reducing the difficult to correct oversteer as was critisized by  the press on the first revision. The GT grade now had a limited slip differential, Bilstein shock absorbers and improved transmission as standard and a traction control system was on the options list. A GT-S grade was added at this time as well as a lower priced GT grade with less equipment. 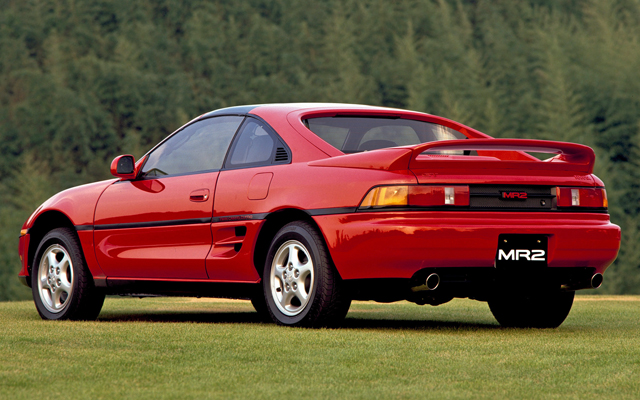 One interesting option for the first and second revision is the El-Glow badge. The MR2 badge on the panel between the rear lights is silver during the day but when the lights are turned on, the badge also lights up. 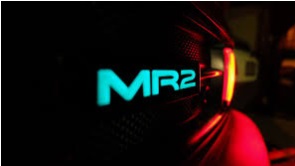 In 1993 there was a significant minor model change (revision 3) with new rear lights, rear spoiler and side sills and mouldings in body color. The biggest change was on the engines, as both engines were also changed from their respective revision 2 to revision 3 version which are said to be more reliable. The normally aspirated version now had 175 horsepower and the Turbo model 245 horsepower.

The revision 4 was introduced as of June 1996 with ABS and dual airbags as standard. For the manual transmission G and G-Limited grades, a limited slip differential was now an option. New colors were also introduced, with a special two-tone called the Sonic Shadow model. It features a silver body with everything above the belt line in black. The wheels also got a polished look.

For available colors, please see the reference to the MR2 Owners Club below:

MR2 SW20 colors throughout the years

December 1997 saw a final minor change to the SW20. The exterior saw three new colors, a new adjustable rear spoiler and new aluminium wheel design. The biggest change was for the normally aspirated engine, which now featured Toyota’s VVT-i system and boosted the engine performance towards 200 horsepower. By August 1999, the MR2 was replaced with the MR-S model in Japan. 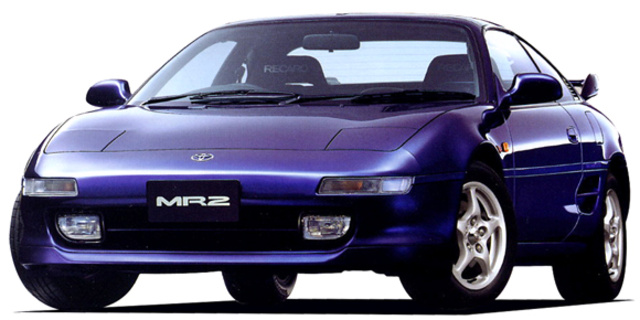 Remarkable versions of the MR2 SW20:
– Sard MC8-R – It is an extremely modified MR2 used by SARD for GT racing. The chassis has been lengthened and a twin-turbo 1UZ-FE V8 engine was used. It is said there is only 1 street version built to meet homologation.
– MR Spider – A softtop convertible version of the SW20 introduced in 1996 by Toyota Racing Development Japan (also know as Toyota Technocraft).
– TOM’S T020 – TOM’S produced aftermarket parts such as body parts and engine tuning for the MR2. The full TOM’S car named T020 was equipped with a 2.2 liter (stroked 3S-GE) normally aspirated engine having 235 horsepower. The car featured also significant tuning was done to the suspension.
– TRD2000GT – A wide bodykit version based on the MR2 Turbo by Toyota Racing Development. Officially 35 units have been converted by Toyota Technocraft.  Cars are also equipped with upgraded suspension and brakes, special wheels and on the interior TRD bucket seats.

Click on the picture below to see all MR2 SW20 versions per year and detailed specifications such as weight, new price and equipment for each version in the Goo-net.com catalog. 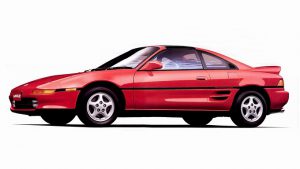 If you want to know more about the Toyota MR2, these are two recommended books: