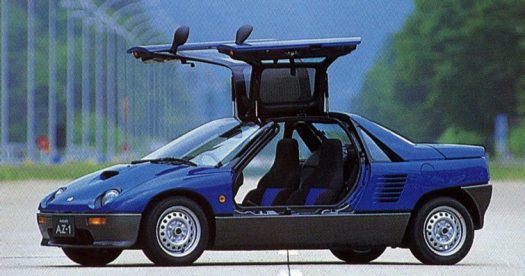 The Autozam AZ-1 is a mid-engined Kei car manufactured by Mazda and sold by Mazda’s subbrand Autozam. The project was initially started by Suzuki in 1985, but stopped in 1987 in favor of the Cappuccino project. At this time, Mazda took over the project and turned the concept into an actual car which was ready for sales in October 1992. Soon after it was also supplied again to Suzuki which sold it as Suzuki Cara.

The exterior of the AZ-1 is characterised with gull-wing doors and side windows which include smaller side windows that can open. The gull-wing door design allowed for very limited space for a window opening mechanism. The top of the gull-wing doors is also glass and this had a special coating to reduce the heat from the sun entering the cabin. The frame of the car was made of steel with many of the bodypanels made out of fibre reinforced plastic, resulting in a vehicle weight of only 720 kilogram. 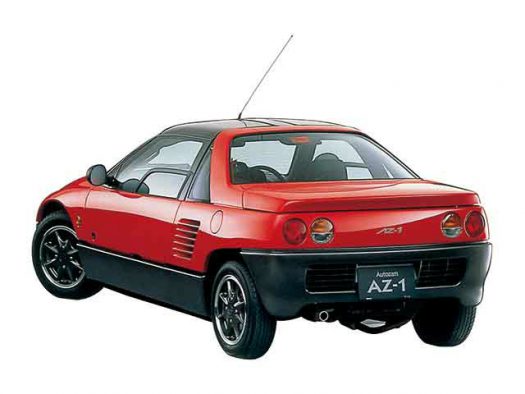 Suzuki supplied the engine for the vehicle. It is the F6A engine which is also found in the Alto Works. It is a 657cc DOHC 3 cylinder with turbo producing 64 horsepower. It is connected to a 5-speed manual transmission with both the front and rear suspension having a strut type. Steering was very direct with only 2.2 turns lock-to-lock and with the low weight, gave the car a very agile handling. Though, the high speed straight line stability is not so good due to the weight distribution is 55% on the rear and 45% on the front. 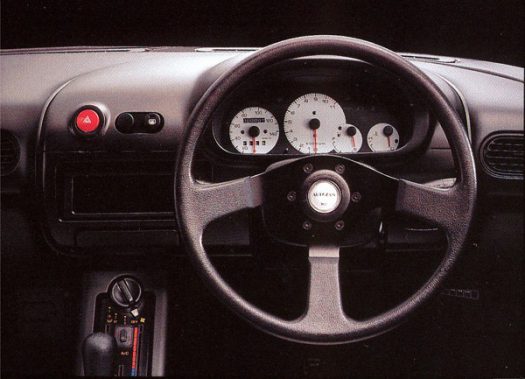 The cabin was very compact with only basic features such as manual air conditioning and a single DIN radio. In front of the driver was the tachometer with the speedometer only on the side. The side sills of the car were high due to the steel skeleton frame of the vehicle, and it meant getting in and out of the vehicle was a bit more difficult than other Kei sports such as the Honda Beat and Suzuki Cappuccino. 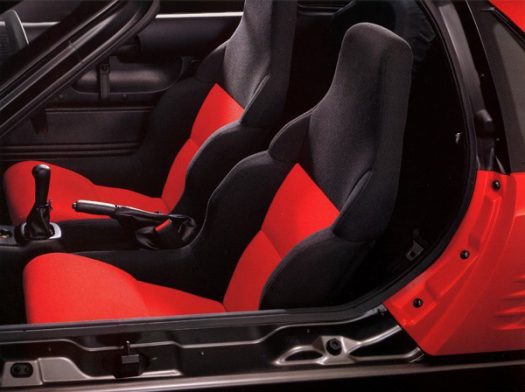 Sales started in October 1992 and ended in December 1995. As the vehicle was not expected to hit high sales volume, production in one of Mazda’s factories would also not seem cost efficient. That is why Mazda partnered with a company called Kurata which produced the vehicles for Mazda. Indeed, only around 4400 units have been produced and this was much less than the Honda Beat and Suzuki Cappuccino of which around  33600 respectively 28000 units have been produced.

Remarkable versions of the Autozam AZ-1 are:
– Mazdaspeed AZ-1 – The official performance division of Mazda released a version of the AZ-1 with aero parts such as new front spoiler, hood and rear spoiler. The car did not come in the two-tone of the regular AZ-1 but in a single color. Mazdaspeed also provided other parts for the AZ-1 such as suspension upgrades, limited slip differential, muffler and air intake.
– M2 1015 – A different performance subsidiary of Mazda was M2, which also made a version with aero parts for the AZ-1. Most noteably being the fog lights incorporated in the hood. The front bumper also changed and a new rear spoiler was fitted.
– GReddy VI-AZ-1 – In 1996 Mazda tuner RE Amemiya showed a AZ-1 with the 20B engine of a Eunos Cosmo and extremely redesigned body. The name is referring to the partnership between RE Amemiya and GReddy. 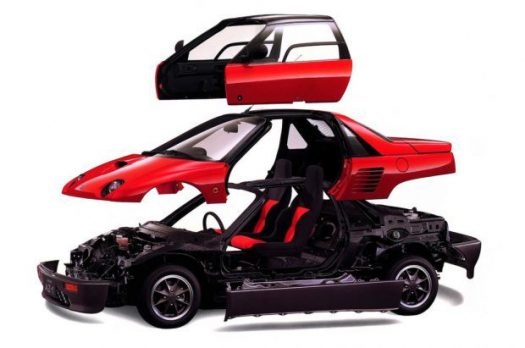 Click on the picture below to see all Autozam AZ-1 versions per year and detailed specifications such as weight, new price and equipment for each version in the Goo-net.com catalog. 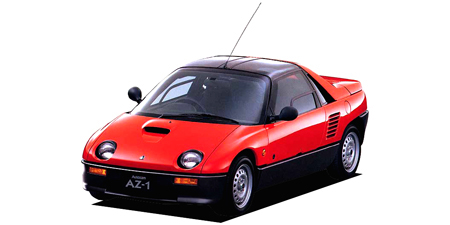