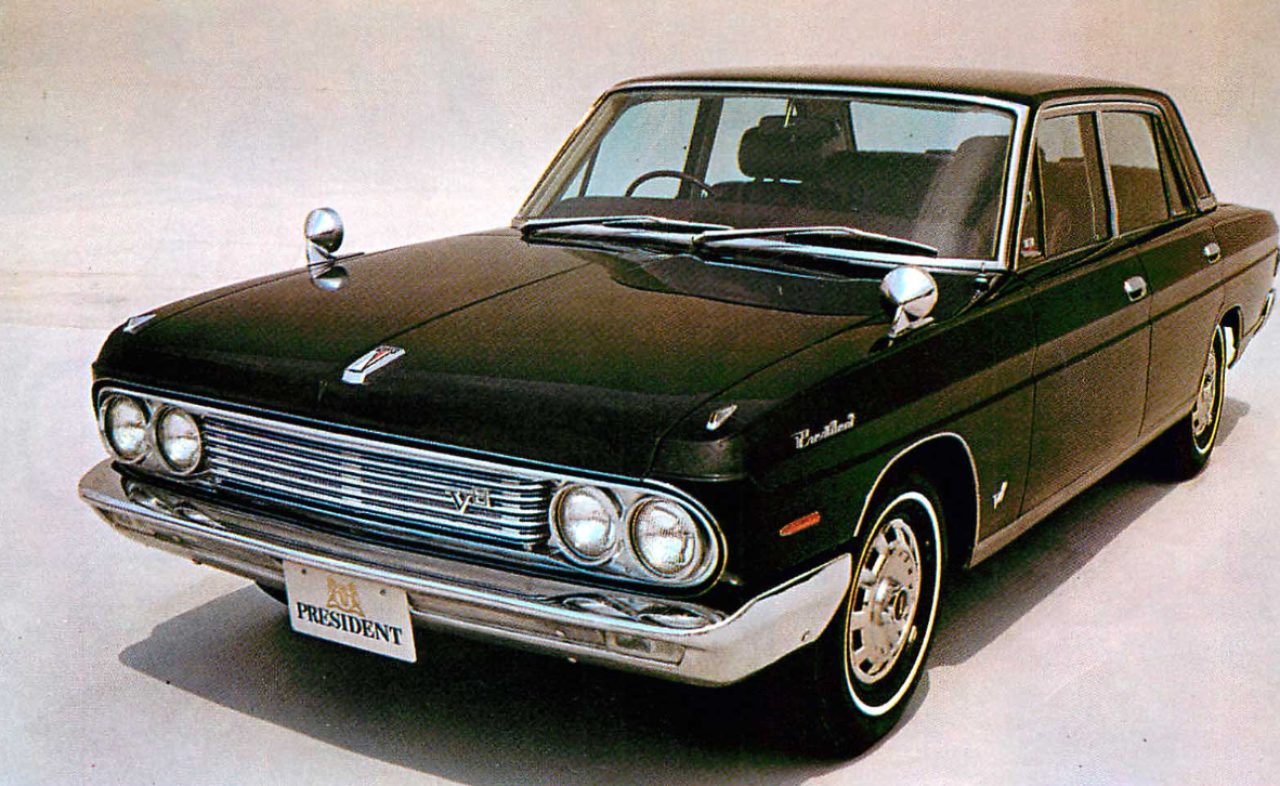 Nissan’s flagship sedan, the President, started sales in 1965 aiming at company executives and to be used by government as state limousine. The H150 model is the first generation which was available with a 3.0 liter 6-cylinder and 4.0 liter 8-cylinder engine. Four grades were available, namely A, B, C, and D. The small engine was available in A and B grade, while the big engine got C and D grade. The President was the first vehicle in Japan to have fender mirrors which were remotely controlled by wire.

In 1973 the second generation was launched marketed as a full model change but actually it was mainly the exterior which changed. The 4.0 liter engine was replaced with a 4.4 liter 8-cylinder unit. Grades were now A, B and D. D being only available for the V8 engine. 1975 until 1977 saw a minor model updates to be compliant with the emissions regulation. At the time, a digital clock was also introduced in the interior which was the first on any of Nissan’s models. A new grade called the Sovereign was introduced. And for 1980 there was a new AM/FM radio with cassette possibility. 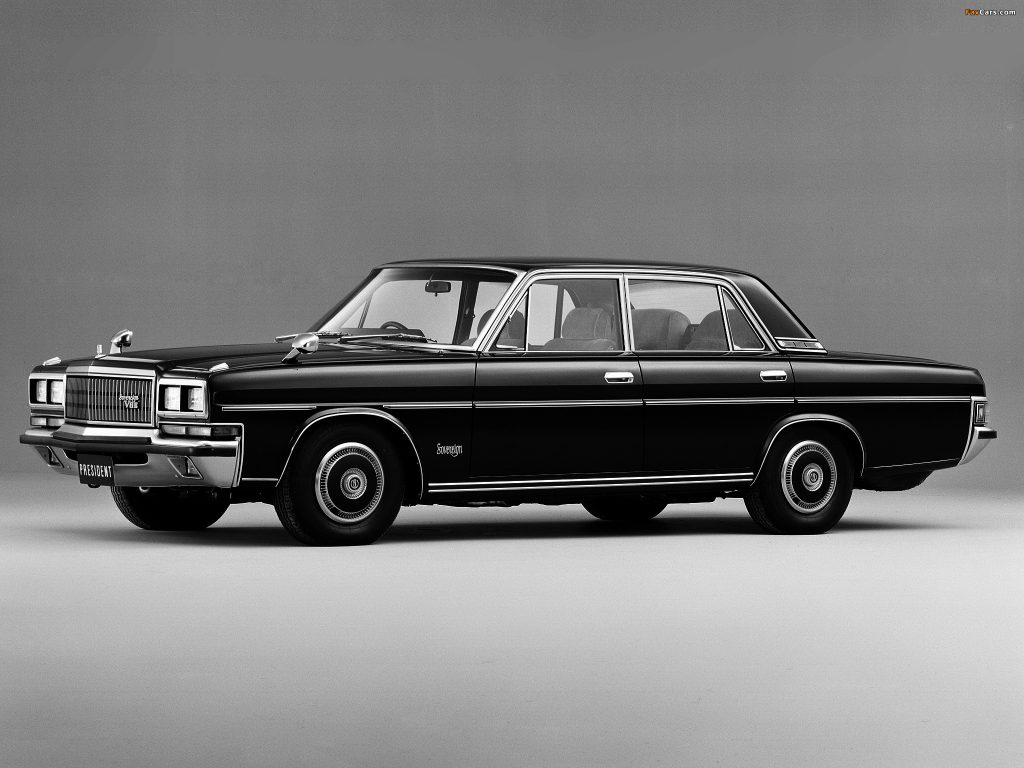 The second generation received a big minor change in 1982 with design changes on the exterior such as square headlights instead of round ones and a new front grille. In the interior the instrument panel was changed. Other technical changes included a new rear suspension and fuel tank size improvement from 75 liters to 95 liters. With minor modifications continuing, the second generation was in production until 1990.

A completely new model third generation (JG 50) was introduced in 1990 with a new four and a half liter V8 engine. Another big feature was the hydraulic active suspension. In 1992 a new short wheelbase version joined the line-up called the President JS (PG 50). A year later a special version with splitted passenger and driver compartment was introduced under the name of Royal Limousine made by Autech. The same year also saw the introduction of an airbag for the rear left passenger. As it was on the back of the front seat, it eliminated the reclining function of the passenger but also reduced the amount sliding. 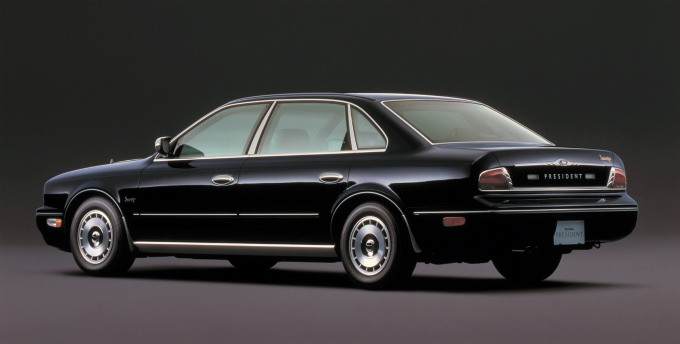 In 1994 and 1998 there were small updates again to the third generation. The rear lights and front grille were changed and foglights were added in 1994. The interior also had a new wood grained panel. In addition, the Sovereign grade was added. For 1998 there was a change done the exterior parts again and the car received xenon headlights. 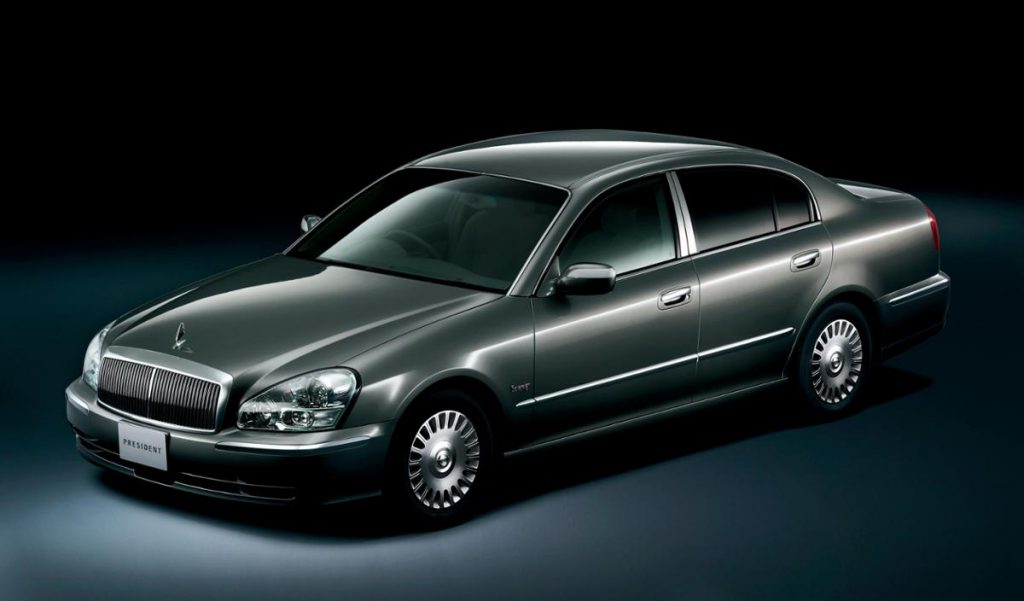 The fourth and last generation was introduced in 2003 and it is based on the Nissan Cima which was introduced two years earlier. Two grades were available, a 4-seater and 5-seater, both under the Sovereign name. Luxury equipment such as seat massage, rear seat table, rear seat DVD player, Bose sound system and possibility to slide the front passenger seat forward gave the rear passengers of the 4-seater a real VIP treatment.  In 2008 there was a minor change which included the anti-scratch paint. The production stopped in 2010.

Click on the picture below to see the Nissan President details and specifications per year such as weight, new price and equipment for each version in the Goo-net.com catalog. 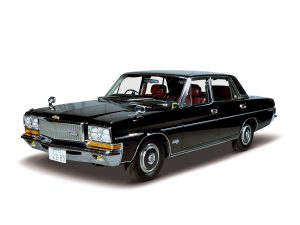